After reading The Terror by Dan Simmons and Ordeal By Ice by Farley Mowat, I felt I was not quite done with the sea, and even the vicissitudes of our book club could not swerve me from my course. And so it was that I picked up a worn and musty copy of the great American classic, Moby Dick, and poured myself into its pages. 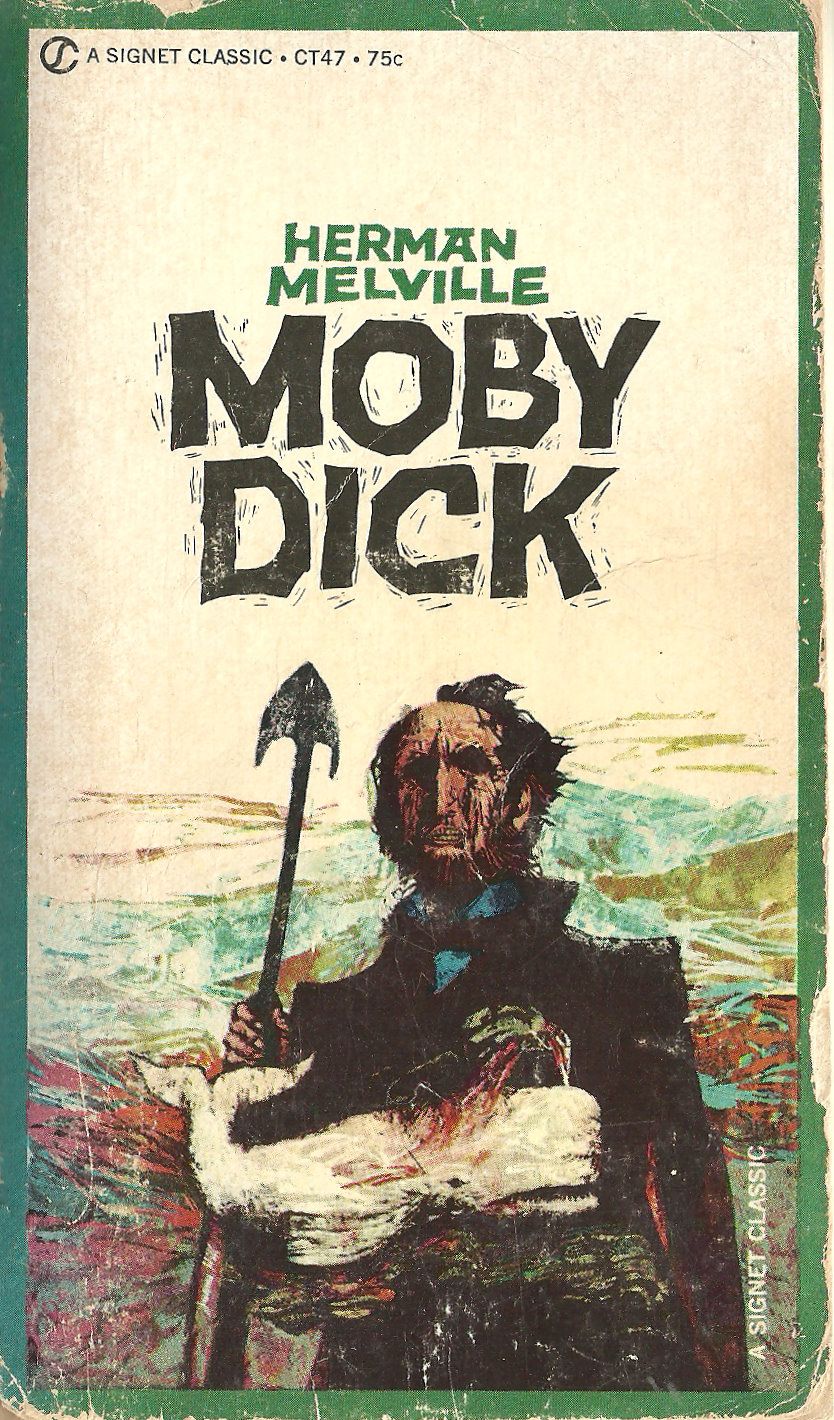 (since one isn't enough to do it justice)

The Gushing and Sharing Excerpts to Illustrate it's Greatness

Moby Dick is, on the surface, a lengthy and detailed account of the trials of 19th century whaling men. In this book you will learn everything you ever wanted to know about the tools of whaling, the boats themselves, whale anatomy, and the trying of blubber. You will also learn that a whaling ship is a microcosm, for here one can find Nantucketers, Amerindians, Filipinos, Parsees, Englishmen, Manxmen, Africans, and south-sea islanders - no two crewmembers hail from the same country, though they all share the same destination. At the helm of this particular ship is the Quaker captain, Ahab - a man not just driven by the hunt for whales, but driven by the hunt for one particular whale - the great white sperm whale known as Moby Dick.

But like the ocean, there is much more below the surface. Moby Dick is a study in contrast, and we learn that nearly everything is more than one thing, depending on the eye of the beholder - the ocean is both life and death, Ahab is a "grand, ungodly, god-like man", and the colour white is described as a 'colourless all-colour'. Moby Dick himself is also many things - the greatest of living things, a god, a demon, the soul of the ocean-sea - he is the whale's whale, the greatest example and least knowable whale of a great and unknowable species. Ishmael, our narrator, describes the sperm whale as faceless creatures, too enigmatic ever to even be properly painted or described all in one go. The book devotes several chapters to describing the whale, but they are spread out into parts, as the whale himself must be when butchered on the sea.

Melville's writing is always exemplary, often dense, and frequently exquisite. Cast your eyes upon this description of the good ship Pequod:

"You never saw such a rare old craft as this same rare old Pequod. She was a ship of the old school...with an old-fashioned, claw-footed look about her. Long seasoned and weather stained in the typhoons and calms of all four oceans, her old hull's complexion was darkened like French Grenadier's, who has alike fought in Egypt and Siberia. Her venerable bows looked bearded. Her masts – cut somewhere off the coast of Japan, where her original ones were lost overboard in a gale – her masts stood stiffly up like the spines of the three old kings of Cologne...She was a thing of trophies. A cannibal of a craft, tricking herself forth in the chased bones of her enemies. All round her unpannelled, open bulwarks were garnished like one continuous jaw, with the long, sharp teeth of the Sperm Whale, inserted there for pins, to fasten her old hempen thews and tendons to."

Hark ye, to how Melville describes, song-like, some fine spermaceti of the sea:

"O Timor Tom! thou famed Leviathan, scarred like an iceberg, who so long did'st lurk in the Oriental straits of that name, whose spout was oft seen from the palmy beach of Ombay."

“O New Zealand Jack! thou terror of all cruisers that crossed their wakes in the vicinity of the Tattoo Land.”

“O Morquan! King of Japan, whose lofty jet they say at times assumed the semblance of a snow-white cross against the sky.”

"O Don Miguel! thou Chilean whale, marked like an old tortoise with mystic hieroglyphics upon the back."

And here, a still, nightime vignette poised atop the carcass of a dead whale:

"The Waif-pole was thrust upright into the dead whale's spout-hole; and the lantern hanging from its top, cast a troubled, flickering glare upon the black, glossy back, and far out upon the midnight waves, which gently chafed the whale's broad flank, like a soft surf upon a beach. Ahab and all his boat's crew seemed asleep but the Parsee; who crouching in the bow, sat watching the sharks that spectrally played round the whale, and tapped the light cedar planks with their tails.... Started from his slumbers, Ahab, face to face, saw the Parsee; and hooped round by the gloom of the night they seemed like the last men in a flooded world. 'I have dreamed it again,' said he."

And another scene of action, upon the sighting of the Leviathan himself:

"'Aye, breach your last to the sun, Moby Dick!' cried Ahab, 'thy hour and thy harpoon are at hand! - Down! down all of ye, but one man at the fore. The boats! - stand by!' Unmindful of the tedious rope-ladders of the shrouds, the men, like shooting stars, slid to the deck..."

"On one side hung a very large oil-painting so thoroughly besmoked, and every way defaced, that in the unequal cross-lights by which you viewed it, it was only by diligent study and a series of systematic visits to it, and careful inquiry of the neighbors, that you could in any way arrive at an understanding of its purpose. Such unaccountable masses of shades and shadows, that at first you almost thought some ambitious young artist, in the time of the New England hags, had endeavored to delineate chaos bewitched.... But what most puzzled and confounded you was a long, limber, portentous, black mass of something hovering in the centre of the picture over three blue, dim, perpendicular lines floating in a nameless yeast. A boggy, soggy, squitchy picture, truly, enough to drive a nervous man distracted."

And when Mervyn Peake wrote of the corpulent cook, Swelter, was he not channeling second mate Stubbs?

"Pull, pull, my fine hearts alive; pull, my children; pull my little ones...Why don't you break your backbones, my boys?... That's it! long and strong. Give way there, give way! The devil fetch ye, ye ragamuffin rapscallions; ye are all asleep. Stop snoring, ye sleepers, and pull. Pull, will ye? pull, can't ye? pull, won't ye? Why in the name of gudgeons and ginger-cakes don't ye pull? - pull and break something! pull, and start your eyes out!"

Moby Dick is a book to swim in again and again.

"Nobody had more class than Melville. To do what he did in Moby-Dick, to tell a story and to risk putting so much material into it. If you could weigh a book, I don’t know any book that would be more full. It’s more full than War and Peace or The Brothers Karamazov. It has Saint Elmo’s fire, and great whales, and grand arguments between heroes, and secret passions. It risks wandering far, far out into the globe. Melville took on the whole world, saw it all in a vision, and risked everything in prose that sings. You have a sense from the very beginning that Melville had a vision in his mind of what this book was going to look like, and he trusted himself to follow it through all the way."