Book Review - A Dream of Wessex by Christopher Priest 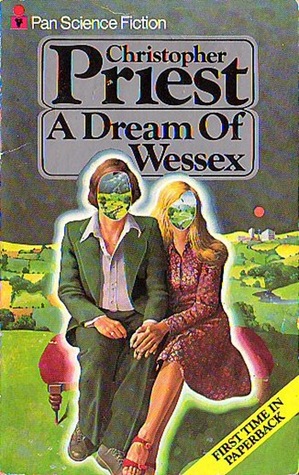 A Dream of Wessex is an early book by Christopher Priest, yet already we see some of his trademark themes – dreamy landscapes, dual realities, manipulative antagonists, and characters who struggle to figure out which way is up. It also has islands – both literal and figurative.

In this novel, the main plot thread revolves around a research institute built under Maiden Castle, an iron age hill fort near Dorchester, Dorset. The institute has a projector that projects the consciousness of researchers 150 years into the future, to an island of Wessex. In this future, control of the world is divided between a Soviet bloc, which controls most of the UK (but not Scotland), and an Islamic bloc, which controls America (but not Canada), among other places. Sea levels have risen, and Wessex is cut off from the rest of England by a channel. It has become something of a resort – though a carefully controlled one by the authorities. Visitors can soak up the sun on Victoria beach, and, in the evening, listen to the songs of the muezzin from the American mosque. At certain times of day, a cannon goes off, warning of the incoming tidal bore which will sweep up the channel. Adventurous souls take to pleasure crafts resembling Sea-doos to ride the bore.

Future Wessex has a dreamlike quality and, and the people who venture there are basically intellectual role-players. When in the dream world, they don't remember the present – but they do remember the dreamworld when they emerge. This is what gives them the ability to study 'the future'. And like many RPG settings, Wessex is something of a shared construct, built from the dreams and wishes of the participants. What happens, then, when a new and unsavoury character is introduced to Wessex to behave like a fly in the ointment? The new character alters the world in his own ways, and things start to change for the other participants. In the dream world, a new projector is set up to take people into the past, and the people who have gone through it can no longer be certain if they are back in the real world, or experiencing a dream within a dream.

These are familiar themes to Priest, and A Dream of Wessex is maybe a bit more explicit in exploring some of them than it is in other, later books. The dream landscape is quite lovingly painted – I really enjoyed the imaginary scenery. Plot-wise, I found it dragged a bit in the middle, and the main antagonist is rather a creep who was not altogether convincing to me. Lastly, there's a bit of 'your love saved me' going on, which comes off a bit trite these days, IMO.