by Jules Verne, 1874, 723 pages
TLDR: 3 out of 5 for a rambling novel with good story elements and a little too much fanciful ingenuity. 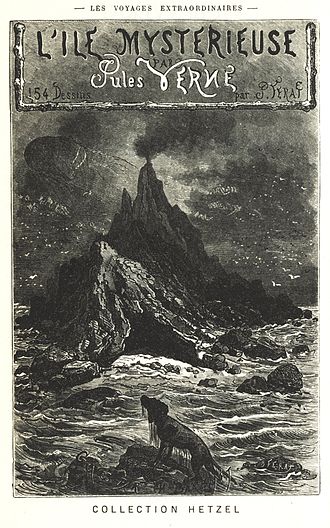 The Secret Island is a castaways style story that builds on two previous Verne novels: 20,000 Leagues Under the Sea and In Search of The Castaways.

The story follows five Americans, northerners who are held as prisoners of war by southern forces, who escape in a stolen hot air balloon during the Seige of Richmond. They include a railway engineer and his ex-slave (now loyal follower) Neb, a reporter, a sailor and his adopted son, and a dog.

They are blown much further than expected and end up over the south pacific, where they eventually crash on a deserted island. They find signs of human activity in the past, but nothing current. Most of the early novel is taken up by the castaways using the powers of science and engineering to make themselves comfortable. They build a granite house (after quarrying the granite using homemade explosives), a sail boat, a farm, and even eventually a working telegraph!

In this section of the book we learn a lot about how to use soda to separate the glycerin from the fat, about sulfate of alumina and nitrate of potash, about the Catalan method of smelting oxidulous iron, about Chinese wormwood and how to make capybara hams and cook them with herbs. There's a lot of geology, and plants from all the continents seem to live here. Eventually they make a sextant and use it to learn exactly where they are.

_"Tomorrow, the sun will pass the meridian and I shall obtain the longitude, and tonight the latitude by measuring the height of the Southern Cross..." _says a character at one point.

Eventually their party is joined by a mysterious castaway from a nearby island after they find a floating bottle note, and by Jub, the surprisingly intelligent baboon who seems to like being bossed around (captured after a failed baboon invasion of their home.)

Eventually, they conclude that they must have some mysterious benefactor - it's the only way to explain all the mysterious occurrences and coincidences. The eventual resolution of this was a nice Aha! moment in the book, so I won't spoil it.

I have mixed feelings about this story. The adventure itself is a fun one, as is the big reveal of the mystery behind the island. Getting there is a bit of a slog, though, as you have to put up with a lot of explaining by one character to another about how to use all the island's wonders to make technological marvels, and Verne likes to go on about plants, animals, and minerals. To be fair, this was somewhat expected by his target audience back in the day, and I can see them being thoroughly enthralled. It's a bit old and far-fetched now though. There are no women in this book, and there is some racism consistent with the period.

I also struggled a little with the audio version read by David McCallion. He's a competent reader, but for some reason he spoke all the dialogue as if the characters were shouting at each other across a windy canyon. And they spoke in unconvincing English accents, which made it seem like McCallion was an american reader poorly portraying English characters, when in fact MacAllion is an English reader who was meant to be portraying American characters!

It's difficult to know who to recommend this book to. I'm pretty sure @clash_bowley would love the detail and could easily overlook the flaws. @Ray_Otus would find the book interesting despite it's flaws. Most everyone would probably find the annoyances getting in the way of their enjoyment, though. It's probably a must-read for serious Verne fans, though, and on Goodreads many people say this is their favourite Verne novel, but it gets a 3 out of 5 from me.