by John Fowles, 1965, 656pp
TLDR: 4 out of 5 for a surreal, post-modern adventure with good bones for RPG adventuring. 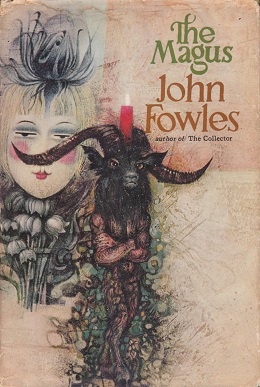 The Magus is described as a 'post-modern' novel, and in the post modern sense that everything you thought you knew was wrong, it certainly fits the bill.

The Magus follows a young Englishman, Nicholas Urfe*, from his departure from school and through a rocky and non-committal relationship in the UK, and eventually to Greece where he makes a fresh start as a school teacher on the island of Phraxos. There, he meets 'the magus' in question, a certain Greek dilletante named Maurice Conchis, in whom he sees a mystery that needs solving.

There's certainly something off about Conchis, and Urfe keeps drawing new conclusions about him with each chapter, most of which prove to be incorrect. Is he a homosexual, a time traveller, a man who keeps ghosts, or a playwright? In some ways he's all of these things, and yet none. His land and villa on the island are inhabited by a strange host of characters - ghostly twins, a black Anubis, a posse of Nazis. Conchis' history is also tangled - what exactly did he do during the war? Was he a collaborator. or something else?

Finally, the truth is revealed to Urfe and he leaves the island heartbroken, nonplussed, and angry. Then he starts to hunt down the people he feels are responsible in a desperate attempt to confront them... and to earn their affection!

I haven't read the game Over the Edge but based on what I've heard of it, this novel must have been an inspiration. There are also shades of The Tempest in here, and The Prisoner. I found it to be quite inspiring in its set-up and can easily see it making the basis for a short, Kafkaesque, campaign.

Recommended if you like an absurdist mystery, but don't mind a story about a guy obsessed with this relationship with women.

*Interesting to me, the main character Nicholas Urfe is a descendant of the French write Honore d'Urfe, who himself was the second cousin to the Sulpician Francois Saturnin Lascaris d'Urfe, who was the first resident priest of my home town in 1668, and after whom it is named. https://en.wikipedia.org/wiki/Fran%C3%A7ois-Saturnin_Lascaris_d%27Urf%C3%A9