Novel Review - Confessions of a Thug by Philip Meadows Taylor

Confessions of a Thug

by Philip Meadows Taylor, 1839, 552pp
TLDR: 4 our of 5 for a naturalistic and documentary account of the Thuggee phenomenon. 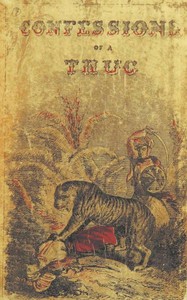 I've always been intrigued by the thuggee - the acts of that particular class of person in India that practiced the profession of murder and theft - and when I discovered this book during the research for my Black Hand of the Raj horror scenario for Trail of Cthulhu, it seemed like the perfect opportunity. I kept my eye open for a used copy for years, and eventually settled on this version from Audible, read by Sanjiv Jhaveri.

Confessions of a Thug is considered a classic in the body of English literature that deals with colonial India. It stands out from all the other books of its time (and many since) for being a naturalistic account of a character who is uniquely Indian without any of the associated superiority and racism that one might expect from a British author. Taylor was, himself, a member of the British civil service and participated in the hunt for and capture of thugs.

Confessions takes to the form of the narrative of the life of Ameer Ali (a fictional character based on the accounts of three real thugs turned informers). His story is revealed to us via an interview with an unnamed Englishman (presumably Taylor himself in voice). Ali reveals how his parents were killed by thugs, and he joined the cult in order to save his life. From there, he learned their ways and got into all kinds of adventures and misadventures, mostly involving the conning and murdering of travellers. In time he becomes a leader, and at one point he and his band become pindars, Muslim irregulars in the employ of the Marathas in their war against the Mughals. Later in his life he is captured and imprisoned, but then released again with a caution. He find himself drawn back into the life of the thug.

Ammer's account is surprisingly natural, and this lends the book the air of a documentary rather than a novel. Ali speaks matter-of-factly about his activities, his motives, and the consequences of his actions. It can make for a dry read, in places, but always one comes back to fascinating little details that create an impression of the place and time. As an adventure story it falls a little short in the writing, but as a genuine account of mid-colonial India it shines. It also presents a fascinating insight into the mind of a serial murderer, and does so without judgement.

Recommended reading for those with an interest in the subject. 4 our of 5.