Novel Review - The Book of Skulls by Robert Silverberg

The Book of Skulls
by Robert Silverberg, 1972, 222 pages, 8 hrs 14 min.
TLDR: 4 out of 5 for an interesting concept and well told, with a thought-provoking end, but lacking in likeable characters. 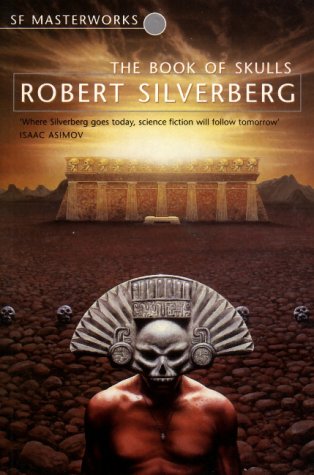 "As by living we daily die, so then by dying shall we forever live."

Nominally a science fiction novel, the Book of Skulls (BoS) was runner-up for the Hugo, Nebula, and Locus awards. And as you can see from the cover image, it's been republished again in the SF Masterworks series by Gollancz, which is the reason I picked this book up. I wouldn't classify it as SF myself – it's more of a horror novel, and structurally very similar to Shirley Jackson's The Haunting of Hill House.

The BoS follows four young American men who embark upon a road trip to the deserts of Arizona to find the House of Skulls, a secret monastery that houses an ancient sect that purports to keep the secret of immortality. According the secrets one of the men unearthed, four men must arrive together to initiate the rites; two of them must give up their lives for the other two to achieve immortality.

They treat their quest at first as a kind of lark, and the first part of the book is pure road-trip from New York to Chicago and then St. Louis. The book is written in the first person from the alternating points of view of the four characters, with the chapters rotating between the four of these twenty-somethings. These young men are all from different backgrounds (a jew, a homosexual, an socialite Anglican, and a Midwest farm boy) and are obsessed with race, class, and sex so the reader gets an earful of crass stereotypes, slurs, and puerile (sometimes graphic) fantasies. They riff off each other and give as good as they get. In spite of all of their isms, they get along and share an understanding of one another. This section works well to set up the climax of the book, but probably goes a little too far, and I think there are few readers who would find any of the characters especially likable.

When they finally get to The House of Skulls in Arizona and enter into the rite of initiation and their characters begin to change. Their regiment of work, self discipline, and meditation (and yes, more rather silly sex fantasies) causes the characters to confront their inner demons and brings their four character arcs to a throbbing climax. (sorry).

Like The Haunting of Hill House, BoS reaches a conclusion that can be interpreted in more than one way. If you liked that novel, chances are you will like this one, too. Personally, I rather enjoyed it. I'd have enjoyed it more if the characters had something more likeable to latch onto, and if the sex was more open and equitable and less repressed, but the characters did at least feel like real people, and you can get around their characters a little by hoping this is a kind of social critique.

And I did find myself still thinking about it days after I finished, so that's a big plus. The quote above from the Book of Skulls itself should be read in the context of the inner self, and refers, I think, to how the characters change through the novel. This book was written the same year as Dying Inside, considered by many to be Silverberg's masterpiece, which shares a similar theme.

I'll recommend it for fans of subtle, personal horror (of the 'we ourselves are horrible' style) who have thick skins and don't mind reading something sexually graphic. If you're coming to this book looking for SF, a fantasy story, or a supernatural horror, you may well be disappointed. The reviews on Goodreads are actually quite good at describing the pros and cons of this book from a variety of viewpoints, so that's a good resource to check before diving into this one.

I've read a few Silverbergs, but the guy must have written 50 books. The World Inside is my favourite so far, followed by Downward to the Earth and then this book. I've heard great things about the Majipoor trilogy, so look for a review of that in the future.

There are many editions of this book, and at least a dozen different covers over the years, which is an indication of its popularity. I listened to the 2012 Audible Publishing version narrated by Stefan Rudnicki, who does a reasonably good job, though struggles a little to give the characters individual voices.