Audio version read by Todd McLaren, 23.25 hrs.
TLDR: 4 out of 5 for a dramatic novel with chewy scenery. 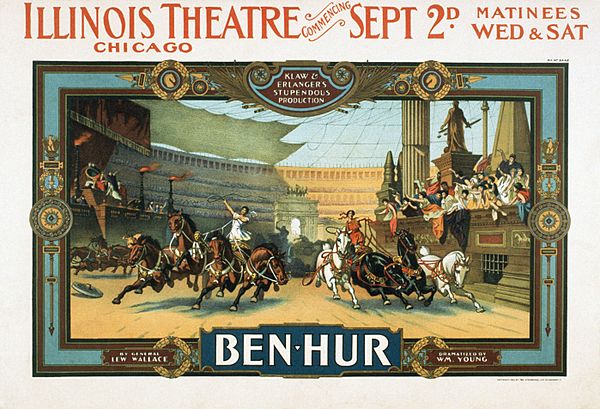 I'm not entirely sure what possessed me to purchase this book, except perhaps that I love the 1959 movie starring Charlton Heston, and like reading books set in the Middle East, especially during the ancient era.

You've no doubt all seen that film (if not, please do - it has aged very well). It adheres fairly closely to the novel, but cuts out a couple of large swaths of the more sedentary portions - as it would have to do, given the length of the book.

The story follows the fortunes of Judah Ben Hur, son of a wealthy hebrew merchant. Ben Hur has plans to join the Roman Army, but everything changes when a freak accident nearly kills the Roman governor of the district, and Judah is accused of being an assassin. He is sent to the galleys, while his mother and sister are imprisoned and their property forfeit - all without trial.

After some years as a Roman galley slave in the Mediterranean, Ben Hur's fortunes change when he is adopted by a Roman officer, and he inherits considerable wealth. When in Antioch, he meets with his father's old slave, Simonides, who is himself is now a wealthy man having secured Ben Hur's father's trading company. He also meets his old friend Messala, who was responsible for grassing him up to the Romans right after the accident.

Ben Hur's thoughts turn to vengeance, and this is one of the main themes of the book. Ben Hur (with the help of Simonides, who has remained loyal to the family after all) concoct a scheme wherein Hur challenges Massala to a chariot race. They goad Massala into betting more than he owns on the race, and during the race Hur drives his chariot into Massala's, causing it to crash and cripple him. Massala loses both the use of is legs, and his fortune. Hur's revenge is complete. This is one of those places where the book differs from the movie, for in the film, Massala is the one who is ruthless on the race track, not Hur. In the book, I found myself questioning Hur's charity.

Hur eventually goes back to Jerusalem where he ends up leading and training a resistance movement, and becomes a follower of The Christ. The book ends differently from the film - not with redemption and healing upon the Resurrection, but perhaps more bittersweetly. I won't spoil it.

One thematic difference between the book and the film is that the film is more subtle in evoking the Christian themes, relying on soulful looks and music as much as anything. The book is rather more open about it, especially in the first scene when the three wise men meet in the desert before we ever meet Ben Hur. This felt heavy handed to me when I was first getting into the book, but now that I've finished it I don't think it is. There's some speculation that Wallace himself was not particularly religious, but in imagining the place and time grew in admiration for early Christians and tried to bring that out.

I really loved the historical detail in this book. Wallace pauses fairly often in his tale to address the reader so that he can set the scene. "Imagine, dear reader, if you will..." and then he launches into a description of the cave where Jesus is born, or of a caravanserai, or the gates of Jerusalem and who might be hanging about, or tells us about the nature of chariot horses. I found it to be a great resource for these kinds of scenes, and the next time I run a game inspired by the middle east, I'll probably return to pick some of these up. Here's a sample:

"To understand thoroughly what happened to the Nazarene at the khan, the reader must be reminded that Eastern inns were different from the inns of the Western world. They were called khans, from the Persian, and, in simplest form, were fenced enclosures, without house or shed, often without a gate or entrance. Their sites were chosen with reference to shade, defence, or water. Such were the inns that sheltered Jacob when he went to seek a wife in Padan-Aram. Their like may been seen at this day in the stopping-places of the desert. On the other hand, some of them, especially those on the roads between great cities, like Jerusalem and Alexandria, were princely establishments, monuments to the piety of the kings who built them. In ordinary, however, they were no more than the house or possession of a sheik, in which, as in headquarters, he swayed his tribe. Lodging the traveller was the least of their uses; they were markets, factories, forts; places of assemblage and residence for merchants and artisans quite as much as places of shelter for belated and wandering wayfarers. Within their walls, all the year round, occurred the multiplied daily transactions of a town."

"The singular management of these hostelries was the feature likely to strike a Western mind with most force. There was no host or hostess; no clerk, cook, or kitchen; a steward at the gate was all the assertion of government or proprietorship anywhere visible. Strangers arriving stayed at will without rendering account. A consequence of the system was that whoever came had to bring his food and culinary outfit with him, or buy them off dealers in the khan. The same rule held good as to his bed and bedding, and forage for his beasts. Water, rest, shelter, and protection were all he looked for from the proprietor, and they were gratuities. The peace of synagogues was sometimes broken by brawling disputants, but that of the khans never. The houses and all their appurtenances were sacred: a well was not more so."

I really lean on descriptions like this when running a game. They help me set the scene and, even more important, tell me which characters are hanging about, and give me an idea of what they'll think and say.

Recommended if you like a good historical tale, and especially if you liked the film. Although the events are similar to the film, there are enough differences that you'll get fresh perspectives, and Wallace can really set a scene, if scenery is what you're after.﻿ 4 our of 5.