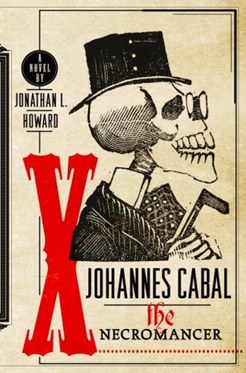 This was our January 2017 pick for the Tabletop Roleplayer's Book Club and was nominated for us by Al Clark who was running an excellent Hauntology community on G+ at the time.

Jonathan Cabal the Necromancer is the first book in a series (now 5 books strong) featuring Johannes Cabal - a necromancer who is obsessed with discovering the secret to reversing death. In order to learn these secrets, he has sold his soul to the devil, but now discovers that without it he lacks that certain je-ne-sais-quoi that will push his experiments into the realm of success, so he needs it back.

The book opens with Cabal marching into hell so he can meet with the devil and renegotiate his deal, which he does after dismantling the bureaucracy of hell using his wit and a severed head. The devil agrees to give him his soul back, provided he can sign 100 replacement souls for the devil instead. And to sweeten the deal, the devil offers Cabal the use of one of his carnivals for a year.

Cabal enlists the help of his vampire brother, Horst, and with his help and a little ball of the devil's magic, they re-build the carnival attractions, sideshows, and entertainers and set off across an imaginary England to capture souls. Problems arise when the supply of new souls gets tight, and Horst and Cabal argue over the nature of the souls collected. Horst insists that they should only collect the souls of those already damned to hell, but Cabal finds himself temped to collect the souls of innocents in order to meet his quota.

Johannes Cabal the Necromancer is filled with nods to pulp horror fiction (especially H.P. Lovecraft) and is written with wit and humour, giving it a Terry Pratchett feel. This come across a little unevenly in the first half of the book, but Howard finds his feet in the second half and the climax of the book is quite satisfying. This is oddly the opposite of what the Wisconsin State Journal apparently thought of it, but I'm here and they aren't, so you'll have to accept my version. Though it seems like the amoral Johannes Cabal ought to be an unlikeable character, Howard actually makes him quite relatable. He's not one for social niceties and cuts his way through all kinds of BS to get to the point. His (ironically more human) vampire brother acts as his foil and moral compass.

I found the novel to be quite satisfying, especially considering it's outside of the normal stream of things I like to read. I'll probably pick up more of the books in this series and give them a go. Recommended for fans of paranormal fantasy and to fans of Terry Pratchett. 3 out of 5.