Novel Review - The Sphinx of the Ice fields by Jules Verne

The Sphinx of the Ice Fields

by Jules Verne, 1898, 198 pages. Also published in English as An Antarctic Mystery.
TLDR: 3.5 out of 5 for a fun premise that builds on a classic story, but has some clunky story-telling. 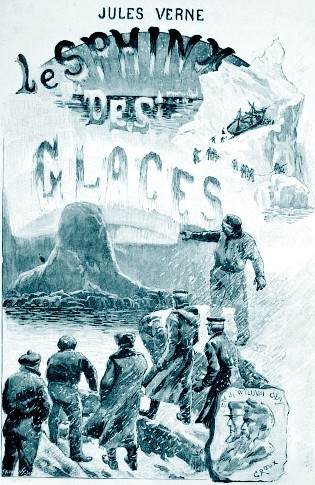 This was a highly interesting read for me as, like Lovecraft's At the Mountains of Madness, it's inspired by Edgar Allen' Poe's novel The Narrative of Arthur Gordon Pym. Indeed it's more than inspired by it - it's a sequel to that work and features some of the same characters. One of the early chapters in The Sphinx is taken up summarizing The Narrative in it's entirety.

Verne begins this story in the Kerguelen Islands, a remote French territory in the southern Indian ocean, where our protagonist, a man named Jeorling, is trying to find a passage home. There is one captain who comes by regularly - Len Guy - but he refuses all passengers. Jeorling convinces him to take him on, though, after telling him that he hails from Connecticut - as Arthur Gordon Pym does. It turns out that Captain Len Guy is obsessed with the narrative of Pym and (unlike everyone else) is convinced that it's a true story. We soon learn that Len Guy is the brother to William Guy, captain of the ship Jane, which was the last ship Pym was on in the narrative. Len is searching for his brother, and a fascinated Jeorling agrees to fund the expedition to find him.

Guy's ship, the Halbrane, then travels to the even more remote island of Tristan da Cunha, then to the Falklands where they pick up more crew. Eventually, after a few mishaps, disagreements, and a great many coincidences, the ship finds itself where the Narrative leaves off, and continues southward to explore Antarctica. I won't say too much for spoilers, but they eventually do find the answer to what happened to that mysterious expedition and, in true Verne fashion, everything can be explained by science (or perhaps By Science! would be a more apt way of putting it.)

What I really liked in this book were Verne's descriptions of the various southern lands, which are very evocative. His depiction of Antarctica beyond the icebergs, though not accurate, is entertaining, and some of his characters (Captain Guy and Hurleygurley the bosun) are quite good, though others fall flat. He manages to sustain the suspense and the sense of adventure through the novel. It has a 19th C. charm that's hard to beat in a boys adventure novel.

What I liked less were the many coincidences that Verne uses to move the story forward, and the 'scientific' answer to the mystery at the end is... pretty far fetched (though maybe wasn't in 1889?). Sensitive readers should also be warned that one of the pivotal characters in the novel, a sailor named Hunt, is referred to simply as 'the half-breed' throughout most of the novel, and in the audio version I listened to he was unnecessarily given the deep, halting voice of a slow-witted person, which compounded the problem. (I'm not sure the character would necessarily come across that way when reading the book.)

All in all, it was a pretty satisfying Verne story and had the usual hallmarks of adventure, exotic places, mystery and Science!, with the bonus of learning more about the Narrative of Arthur Gordon Pym and seeing a different take on what that story might mean, and why it ends so abruptly. 3.5 out of 5.

And by the way, if the notion of Lovecraftian mystery in remote southern islands interests you, check out The Black Drop, an adventure for the Trail of Cthulhu game set in the Kerguelen Archipelago. wired.com/2012/05/the-black-drop-rpg/