Novel Review - The Castle of the Carpathians by Jules Verne

The Castle of the Carpathians 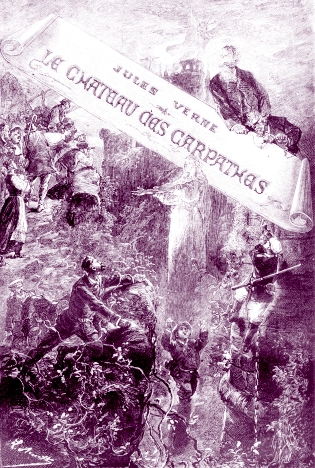 The Castle of the Carpathians, aka The Carpathian Castle, is set in the mysterious land of Transylvania. Near the village of Wertz lies an old abandoned castle thought by local inhabitants to house the Chort, or devil. One day a shepherd spies smoke coming from the building and the villagers become fearful that the beast is a-hoof in their neighbourhood. They timidly mount an expedition to the castle, but are chased away by disembodies voices and strange visions.

A visitor to Wertz, Count Franz de Telek, becomes involved and reveals that the castle is, in fact, owned by Baron Rodolphe de Gortze, whom he last saw at an opera performance during which the opera singer, La Stilla, died. Convinced that the voices and images are those of the opera singer, now held captive by the Baron these last five years, he tells the villagers to summon the police, while he himself enters the maze-like gothic castle to mount a rescue.

This book has many of the hallmarks of Gothic Romance, and at times I was reminded of movie Frankenstein (the fearful villagers timidly approaching the sinister castle) and The Castle of Otranto (disembodies voices). In it's turn, this book likely inspired Bram Stoker to write Dracula, and perhaps also the Phantom of the Opera by Gaston Leroux. H.P. Lovecraft, too, was probably inspired, for in this novel one of the heroes is driven Mad! Mad! Mad! by what he sees inside the castle.

Here, however, in true Verne fashion, the mysteries are ultimately explained away by the wonders of invention.

This was a fun listen for me, and it was interesting to see Verne's foray into gothic fiction. It has the right atmosphere, though the plot is about as engaging as a Scooby Doo episode. I admit that I probably enjoyed just a tad more because the narrator, Patrick Treadway, sounds just like a 20-year-old Vincent Price! For that reason I can forgive him a few small stumbles and recommend the book as a nice diversion. It's probably too short to want to spend a full credit on, so buy it during audible sale if you want it. 3.5 out of 5 for me.

BTW, this was one of my first forays into the lesser known works of Jules Verne, prompted by a discussion I had with @Ray_Otus . Look out for reviews of The Sphinx of The Ice Fields, The Mysterious Island, The Hunt for The Meteor, and A Fantasy of Dr. Ox in the future, to name a few.

This text links to a scanned version of the book, if you'd prefer to read it.

And this is the Wikipedia entry