Book Review - The Flame Before Us by Richard Abbott

Apocryphal
May 9 in Book Reviews 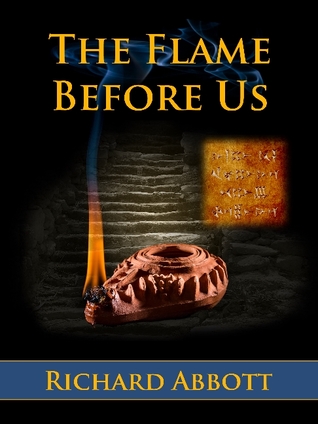 The Flame Before Us by Richard Abbott, 2015, 374pp
I've been meaning to read this book since it was published and am finally doing do, now. I had previously enjoyed his earlier book, Scenes From a Life, which is a related but independent book. @RichardAbbott was writing The Flame at the time I first met him on G+ and I remember him posting excerpts, so I was curious even then. The novel distills the events of a little understood but very widely known event in history - the Bronze Age Collapse and arrival of the Sea Peoples - into an intricately woven narrative involving several families of different backgrounds. Here we follow refugees from the city of Ugarit as they flee southward, a family of Sherden (Sea People) migrants, some local settled Abrahamites, and an Egyptian scribe who travels about with the Egyptian Army trying to manage what is clearly an evolving situation.

For most of the book, these various groups are travelling separately through the countryside and getting bits of news from various sources. This leant the book a fascinating (and convincing, I thought) fog-of-war atmosphere. In the last part, all the parties come together in audience with the king of the minor city of Shalem, (i.e. Jerusalem, which at this time is just another Canaanite city state and far from being a religious and cultural icon), and all the loose ends are nicely tied up.

As Richard himself admits on the afterward, it's all a bit fanciful in distilling events that likely evolved over decades if not centuries into the lives of single individuals, but I found it all works well. We don't know a lot about the period, so any novel set here would need to be highly speculative, and this one is - but it's informed speculation. Richard certainly knows his stuff, and gives a brief afterward with historical notes. I was, myself, very interested to see how he brought various cultural details to life, such as discussions of combat tactics, betrothals, tribal politics, and even how he conducted the audience with the king. I've thought of how to do many of these things myself while running games in Ancient History, and it was nice to see Richard's take, and be exposed to things I had never previously thought of.

My one criticism of the novel is that it can sometimes be hard to distinguish the various groups and characters from one another. There are a lot of named characters, which can be hard to keep track of at the best of times in any novel. And many of them are similar in their role - being a head of a clan, or the head of a clan's wife, or daughter, or a guard. There isn't a lot of guidance to help you distinguish these, and if you lose your way in a moment of early distraction, it can be hard to find it again. Eventually, I clued into the fact that the sections of the book featuring these groups had different graphical dinkuses framing them - for example, the Ugarit family sections are headed and footed by some cuneiform-type characters, and the Sherden sections by little stick-like bonfires, and the Egyptian (who mainly comes to us via his written letters) by shrubbery. However, I didn't clue into the fact that these various dinkuses had some meaning until I was well into the second part of the book. Once you understand the structure (which I thought was effective and clever) I was able to follow, but it wasn't immediately obvious. There is a short section of dramatic personae at the end of the book which handily lists the characters in each group, but I also didn't discover this until later, and it doesn't always tell you the role of the person in the story. For example, it tells us the Murtilis is one of the Sherden, and marries Arkelawos during the story. But it doesn't specify that Murtilis is a daughter of Nikleos, or even that she's a female, or that Nikleos is the head of the family. I think if this guide provided a little more context and had been at the beginning of the book instead of at the end, it would have helped a lot with getting into the early part of the book.

My overall rating 4 out of 5, though I have to admit this is in part because I love reading about the time period and really enjoyed the historical/cultural detail, which others may not. Nobody else is going get the same level of excitement out of seeing that one of the characters is named Abdi-Teshup, for example, and realizing that's a Hurrian name, then seeing in the afterword that Richard intentionally included a Hurrian element to emphasize the multicultural nature of the setting and thinking 'yeah, nice'.

Now, since I can, some history geek questions/comments for @RichardAbbott .
1. One of the characters speculates that 'Arkon' sounded like a made-up title? Did you make it up? Why not stick with Wanax as a title for the Sherden head?
2. What is the Land of Fenku? Who are the Fenku? Is this an Egyptian name?
3. For the purposes of immersion, you chose to use User-Ma'at-Re-Mery-Imun as the name for the Egyptian king when you could have used the more accessible (to the reader) 'Ramesses' . Can you comment on that tension as an author? Paul and I mostly did the same with Mythic Babylon, but kept certain names we felt were iconic - like 'Tigris River' instead of 'Idiqlat', 'Euphrates' instead of 'Purattu', and 'Babylon' instead of 'Babili' - to make the book more accessible.
4. I loved how you described a town that had a gate in the middle of nowhere - despite the fact that it didn't have a city wall - because gates were important places of law and commerce. The book is full of nice little touches like this.