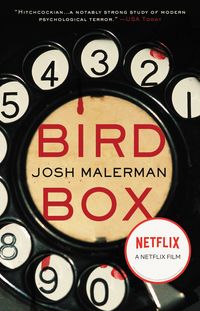 Another book from Audible, this is a psychological horror story in the style of Steven King with echoes of Cormac McCarthy's The Road, John Wyndham's The Day of the Triffids, and H.P. Lovecraft's The Color Out of Space

Bird Box describes an apocalyptic future in which people are going horribly mad and killing themselves in gruesome ways. But it isn't a novel about madness, or about bring gruesome. It's a novel about fear and dread.

The 'madness' in question is associated with sight. In essence, it boils down to the fact that there's something out there... outside... that, if seen, if glanced upon, will drive you to a swift and insane death.

So naturally civilization comes to a crashing halt, and instead we find ourselves huddled in houses with other survivors and the windows covered by opaque curtains. Nobody goes in or out without rigorous checks to make sure they haven't come back mad, or worse - brought something with them. What is the cause of all this? Most speculation points to the arrival of something alien - so alien that us poor humans react viscerally and self-destructively when we see it.

Bird Box is a study in tension and fear. The characters, ordinary people stripped of what made them interesting in their workaday lives, are psychological abstracts. They must learn to survive without being able to see. They must keep their eyes closed, voluntarily.

So what happens when they go to the well and hear a splash? Is the bucket heavier than it should be? Can they trust in dogs to see for them? Can they film the world and watch the tape to see what's causing all this, will that, too, drive them mad? And who are these people that we live with? We rely on them, but do we truly understand them? Do we know what drives them, or what they are capable of when pushed to the limit?

I really enjoyed this book. It was thrilling to read about the horrors that can be found when one is outside one's element. I took pleasure in reading about the steps involved in getting water from a well ''outside" when blind, and wondering what all the sounds are. I suppose my pleasure was heightened by the fact that I listened to this book, which was narrated slowly and deliberately. This is one of those rare books I would say work even better in audio format than in written format. It's written in the first person, so it feels like the narrator is telling her own story. And it frees up to close your eyes and experience the world the way the characters do - relying on the ears and on instinct.

Recommended for people that like to experience a book, that like chills more than thrills, that don't mind if everything doesn't make sense, and who don't need the author to explain everything by the end. 4 out of 5.

The film, Bird Box, starring the ageless Sandra Bullock and John Malkovich is about to be released in theaters and on Netflix. Judging by the trailer, it captures the vibe of the book fairly well.
Bird Box Trailer