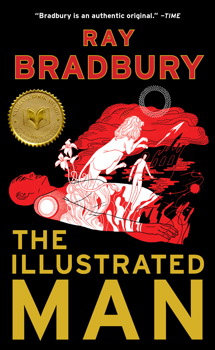 Simon and Schuster rescently released a number of Ray Bradbury books with really nice covers so naturally I was forced to buy them. These included Fahrenheit 451, The Martian Chronicles, and The Illustrated Man The latter two are in bonafide pocketbook format, which is a treat!

The Illustrated Man contains 18 SF short stories of the kind that only Ray Bradbury could come up with. They range in subject matter, but all of them make you think. A surprising number of them (surprising to me, anyway) feature contact with Mars, even though only a few (as far as I can tell) were adapted into the Martian Chronicles. Many of them use 'first contact' as a way to explore some aspect of humanity, and to put a twist on it. A number were turned into TV episodes for Ray Bradbury Theatre, and others became radio dramatizations for X Minus 1 (which you can listen to if you check out @Ray_Otus ' Old Time Radio collection). One of these stories inspired Elton John's Rocket Man. Those stories might be familiar to you. But you'll find others in here that aren't. Yet they all are somehow familiar, because Ray Bradbury had a keen sense of the 1950's American psyche and was really good at putting it on the page.

I won't say much more about the stories themselves. The Wikipedia entry does a good job of summarizing them:

My favourite stories were probably The Last Night of the World, No Partcular Night or Morning, The Fox and the Forest, and The Rocket (because I'm feeling Dads at the moment))

Recommended for all. The stories are a bit dated in terms of language (nobody says 'rocketship' anymore) but the stories and themes are timeless.
5 stars.