Apocryphal
September 2019 in Nominations and Suggestions

It's my turn to pick our book this October, and my choice is Sarah Canary by Karen Joy Fowler, 290pp, 1991 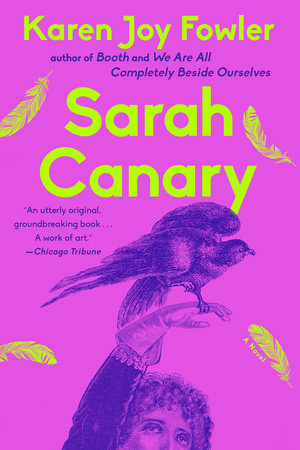 This book will perhaps be unexpected. I haven't seen much talk of it in either gamer or SF circles, so you may not have heard of it. But the book was short-listed for a Nebula award, and was also published in the SF Masterworks series, which is how I think I became aware of it. It's the author's first novel, and she has since risen to greater fame writing general fiction. If you browse through the Goodreads reviews, you'll see a lot of people wondering why this novel qualifies as SF, and that's because the author intended for the work to be read as a Science Fiction novel to SF readers, but as a work of general fiction to everyone else. We'll save the discussion of what makes it an SF novel for October, but rest assured that it's a character-driven novel full of wonder and wonderful things regardless of labels.

To help get you in the mood, here's the introduction:

The years after the American Civil War were characterized by excess, ornamented by cults and corruptions. Calamity Jane rode her horse through Indian country, standing on her head, her tangled hair loose along the horse's sides. Chang and Eng, P. T. Barnum's Siamese twins, hunted boar, fathered children, and drank like the gentlemen they were. The Fox sisters held seances and secretly cracked their toe knuckles to dissemble communication from the beyond. T. P. James, a psychic/mechanic in Vermont, channeled Charles Dickens, allowing him to complete his final book, The Mystery of Edwin Drood, posthumously. Big Jim Kinelly plotted the kidnap of Abraham Lincoln's body. Brigham Young married and Victoria Woodhull told everyone who was sleeping with whom. Football and lawn tennis had their first incarnations.

In 1871, strange events took place in the skies over the central and northern United States. Eyewitness accounts allude to spectacular meteor showers, ghostly lights, and, on the ground, a number of fires whose origins were unknown and whose behavior was, in some ways, disquietingly unfirelike.

In 1872, the residents of the asylum for the insane in Steilacoom, Washington, were thrown out of their beds by earthquakes resulting from volcanic activity in the Cascade Mountains. The event was so profound it cured three of the patients instantly. These cures were responsible for a brief and faddish detour in the care of the mentally ill known as shake treatments.

Across an ocean, in China, the Manchus prepared for the Year of the Rooster and the end of the female Regency. The power of the Dowager Empress shrank. The influence of the place eunuchs grew. Neither had much energy to spare for the Celestials dispersed abroad.

In 1873, in the fir forests below Tacoma, Washington, a white woman with short black hair and a torn black dress stumbled into a Chinese railway worker's camp.

For my part, I've been trying to find a used copy of this book for years, combing the used book stores in Montreal, Toronto, Brockville, Gananoque, Kingston, Hamilton, Dundas, Picton, Chicago, and more. I never had any luck. The closest I came was in Brockville, where I asked the owner of the Book Trader if she had heard of it:
"I'm looking for a book called Sarah Canary. I can't remember the author's name, but I think it's 'Fowler'," I said.
"Karen Joy Fowler?" She asked.
"Yeah, that's it." I answered.
She walked me over to a section near the front. "I keep a section here for the book clubs. I think this is where we'll find her, if I have her. Let's see... Fowler... Fowler... Ah, here you go." She handed me a book.
"This is by Christopher Fowler" I pointed out.
"Oh, who were you looking for?" She asked.
"Karen Joy Fowler," I said.
"Never heard of her. I only have Christopher Fowler." She said.
"But... it was you who just now told me Karen Joy's name." I said, bemused.
"Never head of her. We have a lot of Fowlers, but I don't know that one. Sorry I couldn't help."

I eventually ordered my copy on Amazon.