The Time Dweller by Michael Moorcock, 1969, 192pp
TLDR: Interesting little collection of British New Wave SF stories by this prolific author. Stories written between 1963 and 1966. 3 out of 5. 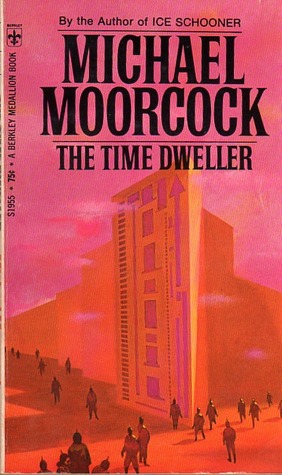 I've read a lot of Moorcock, though most of it in my 20s when his various Eternal Champion series really grabbed me. At that time I also read Behold the Man, Gloriana, The Golden Barge, and perhaps some other stand-alone novels. But I never read The Time Dweller until now.

The Time Dweller collects a number of Moorcock's short stories from the mid 60s.

"The Time Dweller" - 1964 - New Worlds: The Scar-faced Brooder travels from Lanjis Liho to the town of Barbart on a journey of self discover, and in doing so fulfils the destiny of his people.
"Escape From Evening" - 1965 - New Worlds: Pepin Hunchback is unsatisfied with his life on the planet of Moon and heads to Earth in search of the past. There he meets Tall Laughter, one of the Time Dwellers who, like Siduri to Gilgamesh, advises him to return home and enjoy the life he was given.
"The Deep Fix" - 1963 - Science Fantasy: A P.K. Dick like romp through the mind of a scientist in an effort to solve a medical problem. Also the name of Moorcock's band at one point.
"The Mountain" - 1965 - New Worlds: Two apocalypse survivors climb a mountain on the trail of the last female, but find more and less than expected.
"The Pleasure Garden of Felipe Sagittarius" - 1965 - New Worlds: A murder mystery in an alternate universe featuring Kurt Weil, Hitler, and Eva Braun.
"Wolf" - 1966 - In THE DEEP FIX as by James Colvin (a collection from Compact Books): A look inside the mind and instinct of a human wolf.
"The Golden Barge" - 1965 - New Worlds: An excerpt from the novel of the same name, written when Moorcock was only 17.
"The Ruins" - 1966 - New Worlds: Trippy!

While none of these was really super exciting for me, I was reminded that Moorcock really can write evocative prose, and his settings are usually pretty far out. My two favourite stories were the first two - the only two that feature The Time Dweller. I also rather liked the excerpt from The Golden Barge. I remember being fond of that novel. The Wolf was both short and disturbing, and memorable for it.

Rather than say more, here's an excerpt from the opening story, The Time Dweller:

DUSK HAD COME to the universe, albeit the small universe inhabited by Man. The sun of Earth had dimmed, the moon had retreated and salt clogged the sluggish oceans, filled the rivers that toiled slowly between white, crystalline banks, beneath darkened, moody skies that slumbered in eternal evening.

Of course, in the sun's long life this stage was merely one interlude. In perhaps a few thousand years, it would flare to full splendour again. But for the meantime it kept its light in close rein, grumbling in its mighty depths and preparing itself for the next step in its evolution.

It had taken time in its fading and those few creatures who had remained on its planets had managed to adapt. Among them was Man, indefatigable; undeserving, really, considering the lengths he had gone to, in previous epochs, to dispose of him-self. But here he was, in his small universe consisting of one planet without even the satellite which had slid away into space long since and, in its passing, left legends on his lips.

Brown clouds, brown light, brown rocks and brown ocean flecked with white. A pale rider on a pale beast thumping along the shore, the dry taste of ocean salt in his mouth, the stink of a dead oozer in his nostrils.

His name was the Scar-faced Brooder, son of the Sleepy-eyed Smiler, his father and the Pinch-cheeked Worrier, his mother. The seal-beast he rode was called Urge. Its glossy coat was still sleek with the salt-rain that had recently ceased, its snout pointed eagerly forward and its two strong leg-fins thwacked the encrusted shore as it galloped along, dragging its razor-edged tail with scant effort.